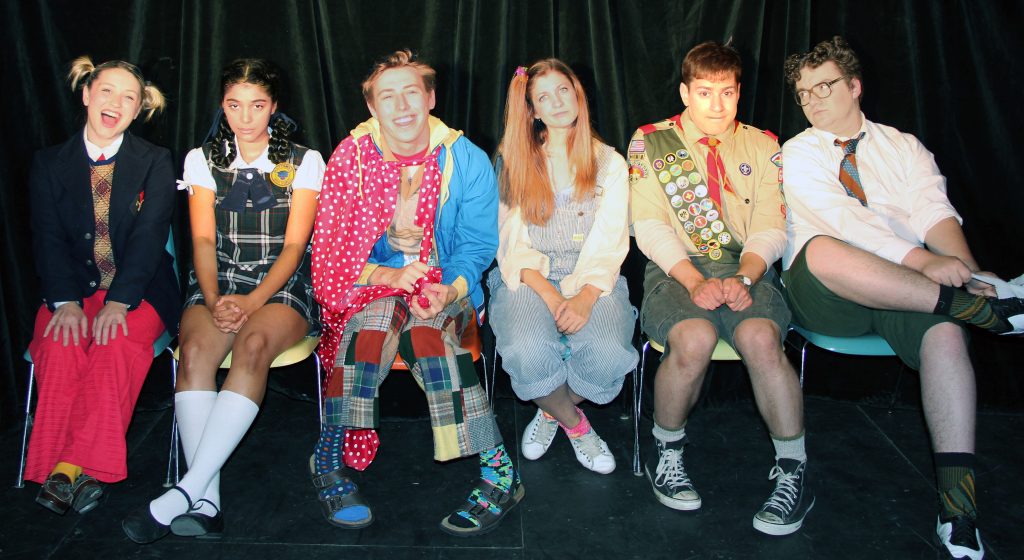 (Augusta, MI) The B-A-R-N Barn Theatre brings together a gaggle of hilarious misfit adolescents who all have one thing in common, they love to spell! This wildly funny, fast-paced musical complete with audience participation, will have you rolling on the floor with laughter as you root for your favorite dictionary fanatic to take home first prize.

The 25th Annual Putnam County Spelling Bee is underway! Former Putnam County Spelling Bee Champion and returning moderator, Ms. Rona Peretti (Samantha Rickard) is ready to welcome our contestants. One of last year’s finalists, William Barfée (Second-year apprentice Christian Edwards) has returned to claim his crown with his “Magic Foot” method of spelling. Logainee Schwartzandgrubenierre (Second-year apprentice Molly Hill) may be the youngest speller but thanks to her two overbearing gay fathers she’s ready to take out the competition. Marcy Park (First year apprentice Brittany Mendoza-Pena), an overachiever from “Our Lady of Intermittent Sorrows” Catholic School, isn’t fazed by this clash of middle school minds. She speaks six languages after all! Chip Tolentino (Barn favorite Jonnie Carpathios), winner of the of the 24th annual Putnam County Spelling Bee, returns to protect his title. Leaf Coneybear (First-year apprentice Cody Edwards) was the second runner up in his district, but has excitedly found his way into the competition. Olive Ostrovsky (Barn favorite Melissa Cotton Hunter) is a newcomer to the Putnam County spelling scene and is just happy to be included. Rounding out the cast are Barn favorites, Charlie King and Patrick Hunter.

The 25th Annual Putnam County Spelling is filled with trance-like states of spellings, hilarious audience participation, catchy songs, and heartfelt moments that show you why these kids love spelling

The musical was based upon C-R-E-P-U-S-C-U-L-E, an original improvisational play created by Rebecca Feldman and performed by The Farm, a New-York-based improvisational comedy troupe. It opened Off-Broadway at the Second Stage Theatre on February 7, 2005. The production won several awards, among them the 2005 Lucille Lortel Awards Outstanding Musical. Premiering on Broadway at the Circle in the Square Theatre on April 15, 2005 taking home the Tony Award for Best Book (Rachel Sheinkin).

Our popular outreach program The Backstage Xperience will be offered for SPELLING BEE June 20, 21, 26, 27, 28. For details and registration call 269-731-1151. Space limited. The Backstage Xperience is an interactive, free opportunity for children K – 12 and is sponsored by Eaton. Email bsx@barntheatreschool.org to form your group.

Dinners at the Barn Theatre

Dinners are nightly and provided by GMC catering of Galesburg. Call the Box Office for dinner reservations at (269) 731-4121 or make yours online now.

The Barn Theatre is located on M-96, west of Augusta.