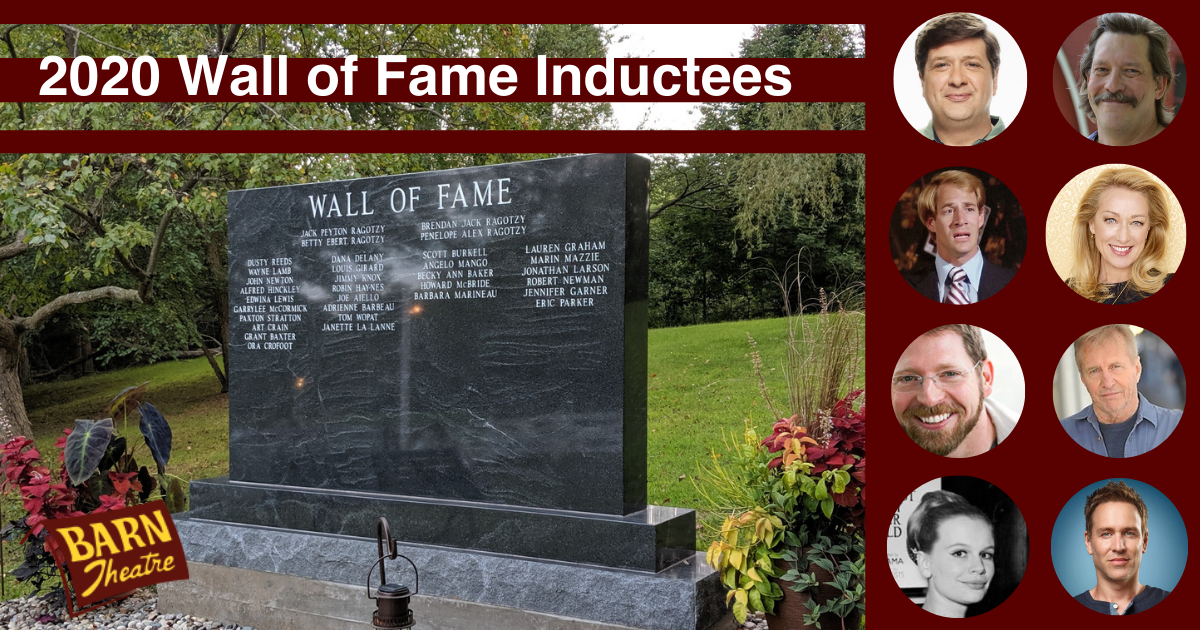 The 2020 class of our Wall of Fame includes 8 Famous Barnies and Equity Actors, who are listed below. We’re thrilled to celebrate these exceptional people and their careers, all of which included time with us here at the Barn!

Kirker Butler. Best known as a writer and producer for Family Guy, Kirker Butler was with us for the 1993 and 1994 seasons and starred most notably as Clem Scragg in LIL ABNER and Sheriff Kimball/John Middletonin in BILLY THE KID.

Charlie King. Charlie apprenticed from 1991 to 1994, and he’s part of our equity staff. His favorite roles at the Barn Theatre include The Big Bopper in BUDDY: THE BUDDY HOLLY STORY, Clem Rogers in THE WILL ROGERS FOLLIES, and Caiaphas in JESUS CHRIST SUPERSTAR.

Lance Barber. Lance was with us in 1992 and 1993, appeared as an Aggie in THE BEST LITTLE WHOREHOUSE IN TEXAS and Peter Kingsley/Gerald Pierce in CITY OF ANGELS, and more. He currently plays Sheldon’s dad on Young Sheldon, George Cooper Sr. The show’s third season begins September 26 on CBS—don’t miss it!

George McDaniel began his apprenticeship running lights for the complicated TAKE HER, SHE’S MINE. He starred as Don Juan Tenorio in DON JUAN IN HELL, Nick in VIRGINIA WOOLF, and Don Quixote in MAN OF LA MANCHA. He has logged in many featured appearances on television and feature films, including the cult classic This is Spinal Tap. He is known for his roles in The Last Starfighter and Lionheart and a stint on the TV series All My Children, and is Mr. Big in our very own Brendan Ragotzy’s film, Raunch and Roll.

Joan Dunham. Her first Equity performance with us was as Morgan Le Fey in CAMELOT. She also starred as Helene in SWEET CHARITY, Rosebella in THE MOST HAPPY FELLA, and Maggie in WALKING HAPPY. Joan was with us from 1965-1969, and made a return for two shows in 1971.

Stephen Lynch. Stephen apprenticed with us from 1993 to 1995 where he played Ewart Dunlop in THE MUSIC MAN, Tobias Ragg in SWEENEY TODD, and more. He later made his way into comedy, originating the lead role of Robbie Hart in THE WEDDING SINGER. He’s appeared on Comedy Central and has toured with the likes of Bob Saget and Jeff Foxworthy, and just released his fourth album: My Old Heart. He recently embarked on a tour of Europe.

Dick Fuchs. Known for his role as Howard in The North Avenue Irregulars, Dick was with us (on and off) for three decades and starred as Stanley Banks in FATHER OF THE BRIDE, Emory in THE BOYS IN THE BAND, and Berger in HAIR, among several other roles over the years.

Patricia Wettig. Patricia performed at the Barn in 1974 and 1975 most notable as Sue Lawson in NOT NOW, DARLING. She has starred in the award-winning series Thirtysomething, for which she won a Golden Globe, Brothers and Sisters, and Prison Break. She is a 3-time Emmy Award winner and has starred in several tv movies.

Learn more about these actors on our Famous Barnies page!