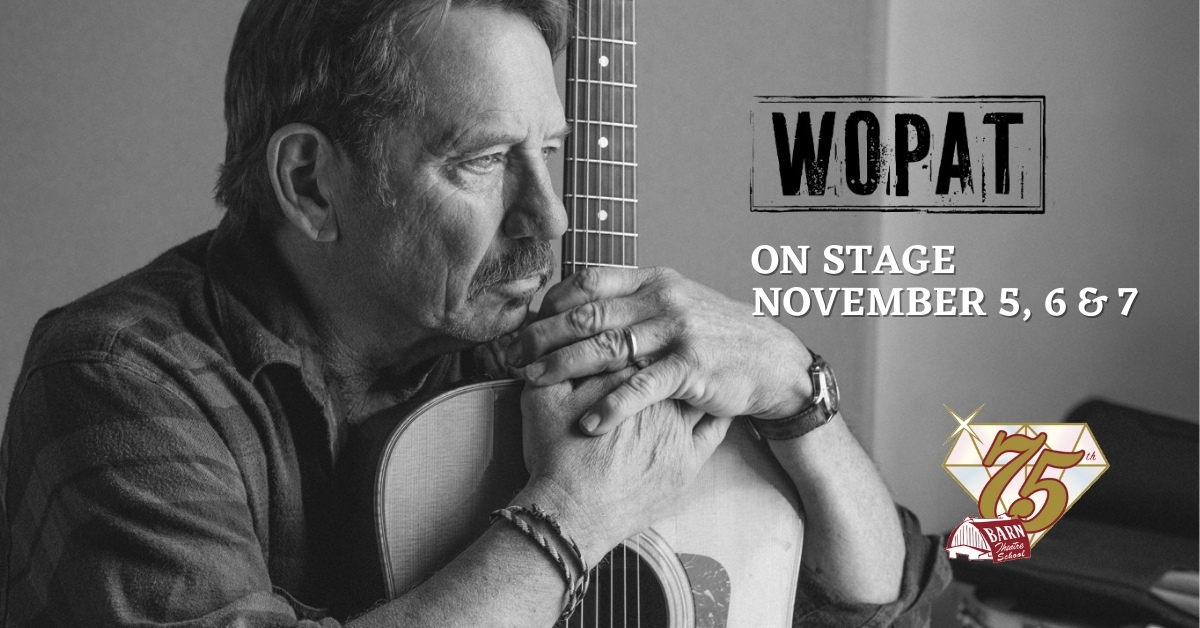 We are so excited to have Tom Wopat with us at the Barn Theatre to celebrate our 75th Anniversary. He and his band will take our main stage for some very special shows for this ONE WEEKEND in November.

His Broadway and national tour resume are vast with a recent appearance being the Sheriff in THE TRIP TO BOUNTIFUL opposite Vanessa Williams and Cicely Tyson. Other credits include CATCH ME IF YOU CAN, 42ND ST (Julian Marsh), CHICAGO (Billy Flynn), GUYS AND DOLLS (Sky Masterson), CITY OF ANGELS (Stone), GLENGARRY GLEN ROSS (James Lingk), ANNIE GET YOUR GUN (Frank Butler - Tony nominee) and A CATERED AFFAIR (Tom drama desk and Tony nominee). Tom‘s theatrical and musical career is eclipsed only by his place in TV history as Luke Duke on the original THE DUKES OF HAZZARD. He also has scores of guest appearances and television movies to his credit. Tom had a surprise holiday album chart hit with his “Home for Christmas” record with fellow ‘Duke’ John Schneider.

From TomWopat.com: All it takes is a phrase or two from Tom Wopat’s warm, engaging baritone to trigger the desire to hear more. And the more one listens, the better it gets — from the way he finds the heart of a song’s story to his lyrical phrasing and his gently swinging, jazz-infused rhythms.

That’s a large handful of uniquely appealing qualities, and they’re all over the fourteen utterly captivating tunes on I’ve Got Your Number. Tom applies his far-ranging interpretive skills to discovering new, intriguing musical twists in such Great American Songbook classics as “The Good Life,” “The Folks Who Live On The Hill,”  “Call Me,” “Born To Be Blue,”  “I Won’t Dance” and, of course, the title track.  As if that wasn’t enough, he also takes his listeners on adventurous new journeys through contemporary songs from the likes of Paul Simon, Judy Collins, Bruce Springsteen, Bruce Hornsby and James Taylor.

At first glance, that could be viewed as a surprisingly diverse program of material from a performer who may be best known for his starring role in the ’80s hit television series The Dukes of Hazzard.  But his versatility was there from the beginning, and on full display in a career reaching from his television work of the ‘70s and ‘80s to high visibility Broadway roles in 1999’s Annie Get Your Gun and 2008’s Catered Affair (he received Tony Award nominations for both), as well as Chicago, Forty-Second St., Sondheim on Sondheim and more.

But with I’ve Got Your Number, Tom’s musical expedition has traveled into colorful territory. Backed by a thirty-piece orchestra he fulfills his desire to focus on what he describes as the “orchestra/big band hybrid of the ‘60s and ‘70s.” “Like the Bobby Darin stuff,” he says.  “Frank Sinatra did big band stuff then, too.  Everybody did.  And we really wanted to go for that — in the standards we’ve done as well as in the contemporary tunes.  We’ve evoked the spirit of the New York supper club era and the cool vibe of the Mad Men days, that’s really what we’re doing.  The music swings hard and there’s a lot of really, really fine music.”

At a time when male vocal artists have been in fairly short supply, his singing is a welcome addition to the contemporary jazz scene.

“Performing these songs the way we do in I’ve Got Your Number is the most creative thing I do,” Tom concludes.  “It’s extremely satisfying and fulfilling.  And as long as it feels that way, I’m going to keep right on doing it.”