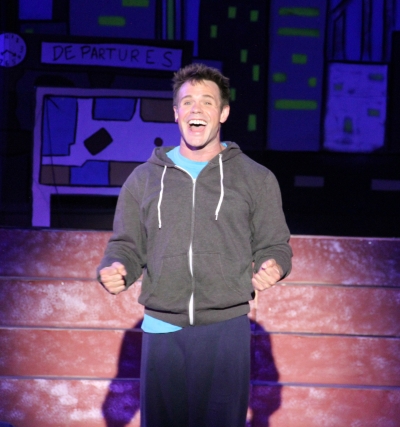 Making musicals out of movies, especially movies from bygone decades, is a popular genre that plays well not only to those who remember the original musical, but to new generations who are experiencing it for the first time.

Augusta’s Barn Theatre is currently performing one of those feel-good, remember-when musicals—Big the Musical, based off the 1988 movie directed by Penny Marshall and starring Tom Hanks. In 1996 it was made into a musical and now it makes the rounds as a show that is charming, sweet and cute, much like the original.

It’s a story of Josh, a 12-year-old, who like most kids his age, really wants to be a grown-up. He makes a wish at a carnival and overnight finds himself turned into a grownup. He heads to the big city, visiting a toy store and learning just what it means to be an adult.

In the Barn production, directed by Patrick Hunter, the adult Josh is played by Jamey Grisham who expertly makes the audience believe he is a kid in adult clothing. He has a refreshing child-like way about him that is so convincing, you’re not sure how anyone actually mistakes him for an adult.

It is Grisham who gives this show much of its charm and sweetness. It’s even okay when he kisses Susan (Melissa Cotton Hunter) because he is so convincingly a 13-year-old.

Children long to be grown before their time, yet adults wish to be young again is the truism at the heart of the beloved 1988 film “Big,” starring Tom Hanks, and its themes, characters and story are just as delightful 31 years later translated into the 1996 musical adaptation at The Barn Theatre where children get a peek at what it is to be grown and adults get to be children again — both on and off stage.

Director Patrick Hunter has created a gem with an exceptional cast and infinite artistic choices that make the heart of this show really sing. The book by John Weidman retains the best of the movie, written by Gary Ross and Anne Spielberg, and puts it to a little bit funky and generally quite fun music by David Shire with lyrics by Richard Maltby, Jr.

Set in 1995 New Jersey, “Big” tells the story of 12-year-old Josh Baskin whose wish to be big after an embarrassing moment of not being tall enough for a carnival ride in front of his unrequited love is granted, and he is transformed into a 30-year-old man overnight. Manchild Josh’s inner 12-year-old wins over the CEO of a toy company to land him a Vice President position with a corner office and tricked-out apartment, as well as a sexy, jaded lady, and he ultimately inspires everyone to remember who they truly are and enjoy life for best results.