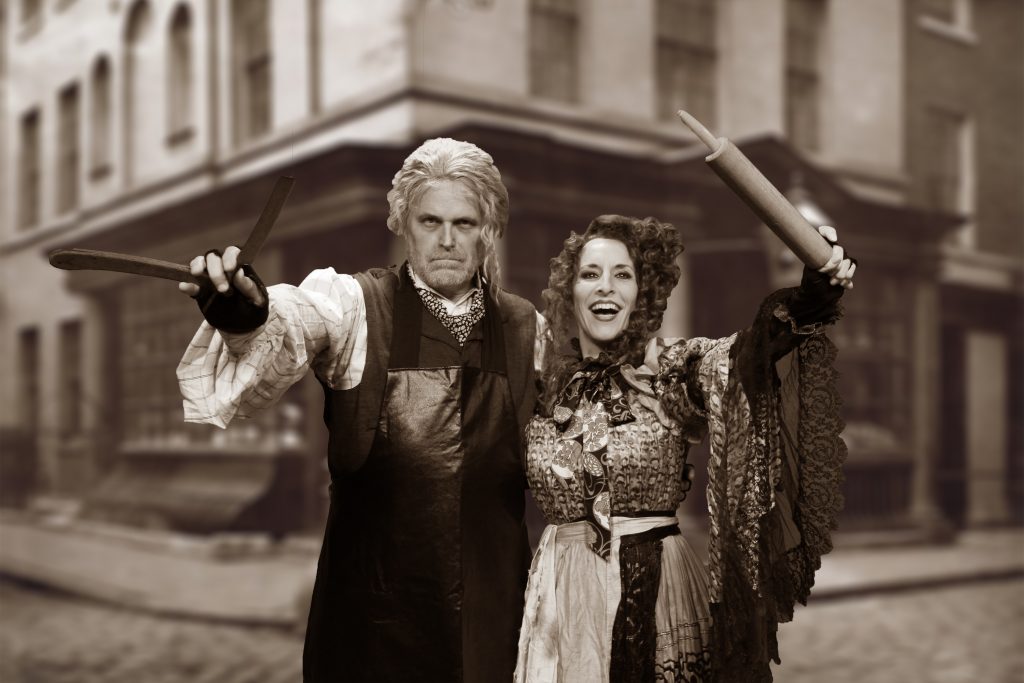 Opening Tuesday, July 2 at 8:00pm and playing through July 14

(Augusta, MI) The Barn Theatre requests your attendance to the tale of Sweeney Todd this July! The story of the demon barber of Fleet Street is a dark, witty and Tony Award-winning musical tale of love, murder and revenge. Playing July 2 – 14.

Journey to 1846 London, as a young sailor, Anthony (Jonnie Carpathios), arrives on the docks with a strange man he saved while at sea. The man, Sweeney Todd (Robert Newman), was wrongfully banished by a crooked judge who lusted after his wife. Mrs. Lovett (Penelope Alex), the unkempt owner of a meat pie shop that makes “The Worst Pies in London”, informs Sweeney Todd that his wife, Lucy (Melissa Cotton Hunter), poisoned herself. His daughter, Joanna (First-year apprentice Cosette Smith), is now in possession of the dastardly Judge Turpin (John Jay Espino). With the help of Mrs. Lovett, Todd plots his revenge against Judge Turpin and his servant Beadle Bamford (Patrick Hunter), who helped Turpin lure Todd’s poor wife to the judge’s den. Accompanied by a chilling score written by renowned Broadway composer Stephen Sondheim, Sweeney Todd is out for blood. No one is safe from the wrath of the demon barber of Fleet Street. This production is rated R.

The original production of Sweeney Todd premiered on Broadway at the Uris Theatre on March 1, 1979. The production was nominated for nine Tony Awards, winning eight including Best Musical. There have been several revivals, most recently an Off-Broadway production starring Norm Lewis and Carolee Carmello that took place in an actual pieshop.

The Barn Theatre School and Eaton are proud to present an American Sign Language interpreted performance of SWEENEY TODD on Wednesday, July 10.

Sweeney Todd is our adult Backstage Xperience show this season! Adult BsX is a fun, interactive opportunity. Participants are given an inside peek at behind the scenes areas that are typically off limits to the public. They are also provided a catered meal from GMC Catering and get to interact with our wonderful staff and a Q&A with star Robert Newman!

Enjoy refreshments in the Rehearsal Shed Lounge with friends before the show, during intermission, and after the actors have taken their final bows. Take in our cabaret-style show after the main stage performances while satisfying your cravings with some light snacks.

The Barn Theatre is located on M-96, west of Augusta.

Tickets can be purchased online anytime. To reserve tickets, call (269) 731-4121 or visit our Box Office Online.